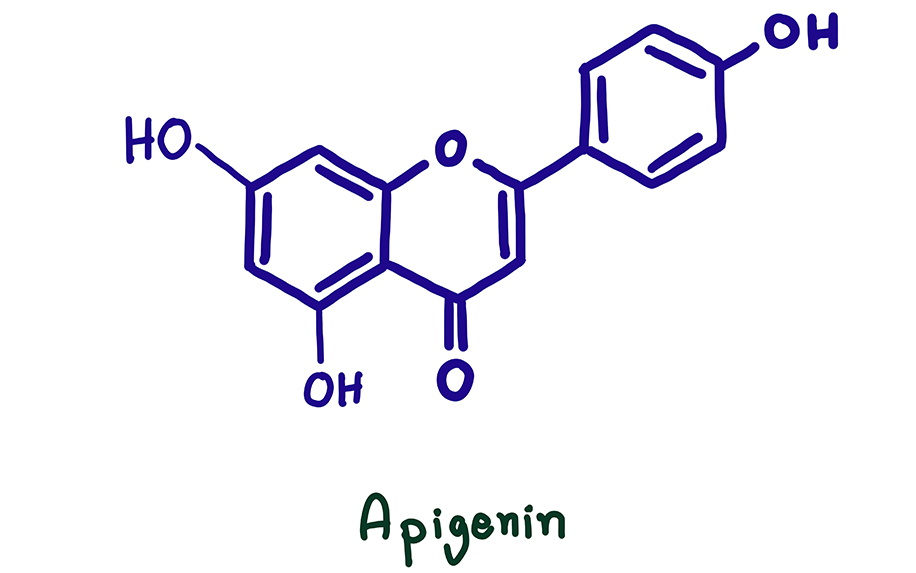 Part of the phytonutrient family, flavonoids like Apigenin are known to have antioxidant, anti-inflammatory, antibacterial, and antiviral properties. Image Credit: By PNOIARSA on shutterstock.

As perhaps the least heralded of cannabis’s many components, the 23 flavonoids contained in the plant have largely flown under the radar. But with the explosion of research promised by the 2018 Farm Bill, and a heightened interest in natural anti-inflammatories in the wake of the opioid epidemic, these little-known compounds may have a more glamorous future in store.

Part of the phytonutrient family, flavonoids are found throughout the plant kingdom and are known to have antioxidant, anti-inflammatory, antibacterial, and antiviral properties. There are 6,000 flavonoids in all which have been identified, and cannabis shares most of its flavonoids with other plants as well.

Flavonoids are responsible for plants’ UV protection, disease resiliency, pest and fungi repulsion, nitrogen fixation, and more. In combination with terpenes, they provide cannabis plants their unique odors and tastes. When paired with the other organic chemicals in cannabis, flavonoids help deliver the “entourage effect,” which refers to the synergistic interplay between THC and its fellow compounds.

Apigenin has not been as overlooked as most of cannabis’s other flavonoids, due to its intriguing potential in fighting cancer, among a slew of other beneficial effects — many of which are shared by its more prominent cannabis compound counterparts.

Apigenin Could Have Anti-Cancer, Anti-Obesity Potential

In a number of studies, such as a 2006 paper in the journal Advances in Molecular and Cellular Endocrinology, apigenin has been shown to block several enzymes that help tumor formation. This mechanism is responsible for apigenin’s cancer-fighting effects on cancers of the head, neck, and prostate. And researchers have found evidence that the flavonoid could actually cause cell death in cancer cells in the breast, liver, and uterus, according to a 2016 study in the journal Nutraceuticals.

Interestingly, apigenin has also demonstrated its own “entourage effect.” Where naturally-delivered apigenin has been shown to lower the incidence of breast cancer tumors in women on hormone therapy regimens, pure apigenin extract has been shown in at least one study (from researchers at the University of Missouri-Columbia in 2013) to increase the growth of these tumors. In this circuitous manner the flavonoid has made its own argument against the methodology of modern pharmacology, which seeks to isolate compounds into proprietary drugs, in favor of a full-spectrum model.

Apigenin’s effects on inflammation could also be useful on the cancer-fighting front (as well as for other purposes). Here again, apigenin achieves many of its effects in an indirect way, by inhibiting or stimulating the production of cytokines and other molecules that have more direct control over inflammation. Through these mechanisms, the flavonoid has been shown to protect the lungs, colon, and endocardium of mice and rats. It also lowers the immune system’s response to sepsis, as detailed in a 2016 paper published in the journal Immunopharmacology and Immunotoxicology.

Past the headline effects, apigenin has a slew of intriguing potential uses that are just now being understood by researchers. One of the most promising is the compound’s anti-obesity properties, which have been examined in studies using different markers that apigenin affects. In a 2016 study from Korean researchers in the journal Nutrients, obesity markers like dyslipidemia, hepatic steatosis and insulin resistance were lowered. In another study, published in 2013 by the journal Diabetes, researchers found that apigenin could have the ability to raise anti-obesity coenzyme NAD+, along with aiding glucose and fat regulation.

Another exciting effect claimed by some of the currently-trendy cannabis compounds is neuroprotection — a power that is shared by apigenin. According to a 2017 study in the International Journal of Biological Sciences, apigenin was shown to improve neurological outcomes in mice and rats that had experienced strokes, increasing the number of surviving neurons and decreasing the amount of dead brain tissues.

Scientists have also found apigenin could have a number of positive effects on mood and brain function, largely thanks to studies on chamomile tea (since apigenin makes up 68 percent of the tea’s total volume of flavonoids). A 2013 paper in the Journal of Clinical Psychopharmacology found the compound to be effective at managing anxiety, and also lowering the cortisol production which can lead to depression. In 2018, a study in the journal Nutritional Neuroscience showed that apigenin could potentially improve memory and help with learning deficits by improving function in the brain’s BDNF pathway, which has a strong influence on both memory and learning.