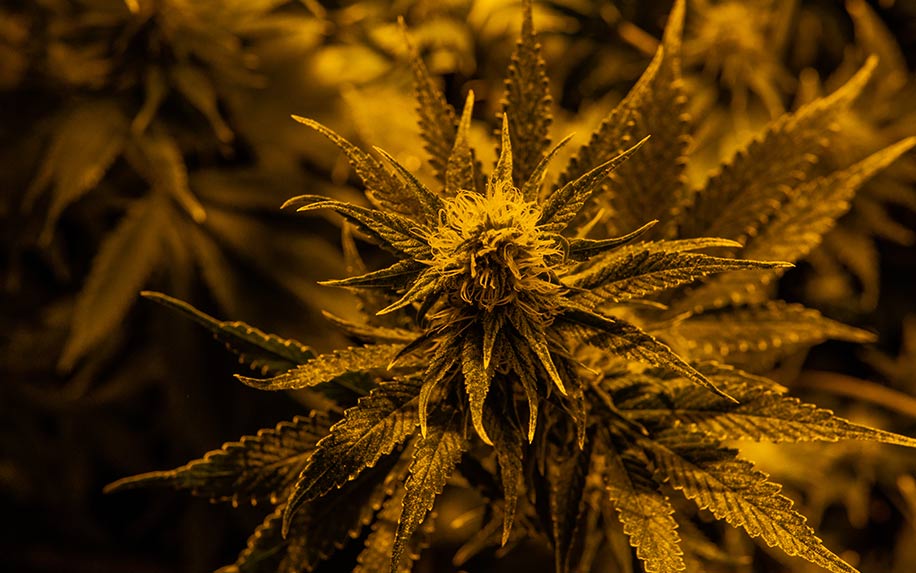 Caryophyllene shows promise for a wide variety of medical applications.Image Credit: By content_creator on shutterstock.

In the world of cannabis, terpenes are starting to have their moment. Most people have heard of THC, and more recently, CBD, but there’s a whole other class of organic compounds found in cannabis that researchers are just beginning to explore. Terpenes are aromatic molecules in the essential oils of plants, produced to ward off herbivores and attract their predators. They give plants and herbs their distinct smells — the terpene pinene, for example, is what makes a pine tree smell like a pine tree.

The cannabis plant produces hundreds of terpenes in its trichomes — the sticky, crystal hairs covering buds that also produce cannabinoids such as THC and CBD — though terpenes only make up about 2 percent of the plant’s composition. What makes terpenes an especially exciting area of research is that like THC and CBD, they hold potential as alternatives to pharmaceutical treatments for improving health and treating health conditions — and one of the most promising is beta-caryophyllene.

Beta-caryophyllene, also known as caryophyllene, is found in spicy, peppery herbs like cloves, black pepper, and oregano. It’s also the most abundant terpene in cannabis. It’s the first “dietary cannabinoid,” approved by the FDA as a food additive. Caryophyllene is unique among terpenes because it’s the only one that can bind directly to a cannabinoid receptor. While other terpenes facilitate the interaction between cannabinoids and the endocannabinoid system, caryophyllene acts like a cannabinoid, binding with the CB2 receptors that are involved in regulating our immune system. When activated, these receptors can also play a role in reducing inflammation.

How Caryophyllene May Be Most Effective

The research on caryophyllene show the terpene doing just that. In one study published in the journal Physiology & Behavior, CB2 receptors in mice were activated with caryophyllene. The mice showed a reduction in symptoms of anxiety and depression, offering “exciting prospects” for future investigations. Research in the Journal of Neurochemistry suggests caryophyllene may also help protect the brain when deprived of oxygen, while a 2016 study in Experimental and Therapeutic Medicine found it could play a role in the prevention and treatment of osteoporosis, and another in Life Sciences found it could soothe the symptoms of colitis. It can rapidly kill bacteria and fungi and may help curb the growth of cancer cells, as detailed in Pharmaceutical Biology and Cancer Medicine, respectively, and a 2007 paper in the Journal of Pharmacy and Pharmacology suggested it could improve the effects of some anticancer drugs.

Caryophyllene has analgesic properties, particularly through reducing inflammation. This would make the terpene doubly effective as a treatment for cancer — pain-killing and drug-boosting — and for anyone else who suffers from occasional or long-term pain. When combined with other terpenes including linalool and eucalyptol in a topical cream, caryophyllene relieved severe menstrual cramps, according to a 2012 study in the Journal of Obstetrics and Gynaecology. It’s considered “highly effective” for treating acute, long-term pain, according to a 2014 study on mice. But perhaps caryophyllene’s most intriguing property is the role it may play in fighting alcohol addiction and treating the effects of alcohol damage on the body.

According to several studies, CB2 receptors play a prominent role in alcohol reward. And because caryophyllene is a CB2 agonist — able to activate CB2 receptors — there’s reason to believe the terpene could interrupt that reward system. In a 2014 study that explored the CB2 receptor’s relationship to alcoholism, caryophyllene was shown to reduce alcohol consumption and preference in mice. Researchers said the terpene “may represent a potential pharmacological target” as a treatment for alcohol. Results of another study published in 2018 illuminated caryophyllene’s protective properties against chronic or binge alcohol-induced liver disease.

It also might be able to help people quit smoking, too — a 2011 study published in the Journal of Pharmacology showed caryophyllene contributed to reducing nicotine cravings.

While these potential benefits alone are heartening, caryophyllene may be even more effective when consumed as part of the whole cannabis plant. Known as the entourage effect, it’s purported that THC, CBD, and other cannabinoids are more effective at activating the endocannabinoid system when they work together, rather than as isolates. With terpenes like caryophyllene in the mix, the therapeutic benefits of medical cannabis are ever-expanding.